This weekend was one of friends and family.  I had so much fun this weekend I don’t want it to end.  First this weekend had a lot of fear in me.  The kids had their Tae Kwon Do tournament, last year my hearing took a dive on this weekend.  I was starting to get nervous would history repeat itself?  The tournament was on, the movie we watched that night and I was so scared because I couldn’t hear it, part 2 of the movie was on this weekend.  What are the odd’s?  I was getting really scared and nervous and reached out to a friend of mine.  This friend was my ASL (American Sign Language) teacher.  We became friends and I vented  to her.  She ended up coming with me to the tournament and we had a fabulous day!  We were both a tad nervous about hanging out, would we get along, would the kids like this, would there be a communication barrier, were all things I though about.  All these things were unneeded worry.  We had a great day.  I got to hang out with another wonderful friend also.  Her daughter is just a doll, love her like a daughter.  You will see her in some of these pictures also.  Greta helped at the tournament and Henry competed.  He ended up getting 3rd place in his forms and 1st place in sparring.  Here are some pictures from our day our Saturday. 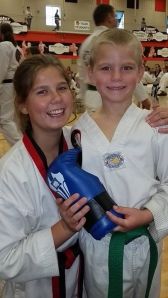 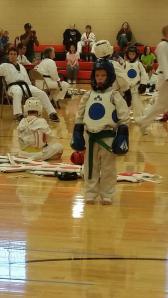 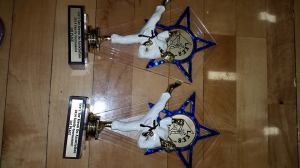 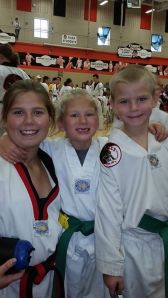 Sunday is a family day in my mind.  Today we had lunch together then a day off playing for the kids and watching some Sons of Anarchy for Chad and I.  This evening we went to a Halloween party for our 4H group.  What a fun evening.  We met out a an old Town Hall building.  Think one room school house.  There was pumpkin carving, sscavengerhunt, a potluck supper, and lots of playing.  Here are some pictures from tonight.  Greta was dressed at Katniss from Hunger Games and Henry was superman and then stripped that off and he was wearing all camo under there so an army man.

I hope you all had great weekends and I hope that wonderful feeling I have now will carry on through the whole week. 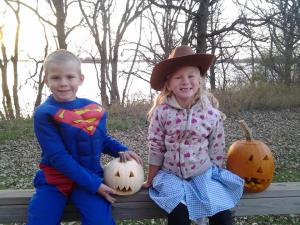