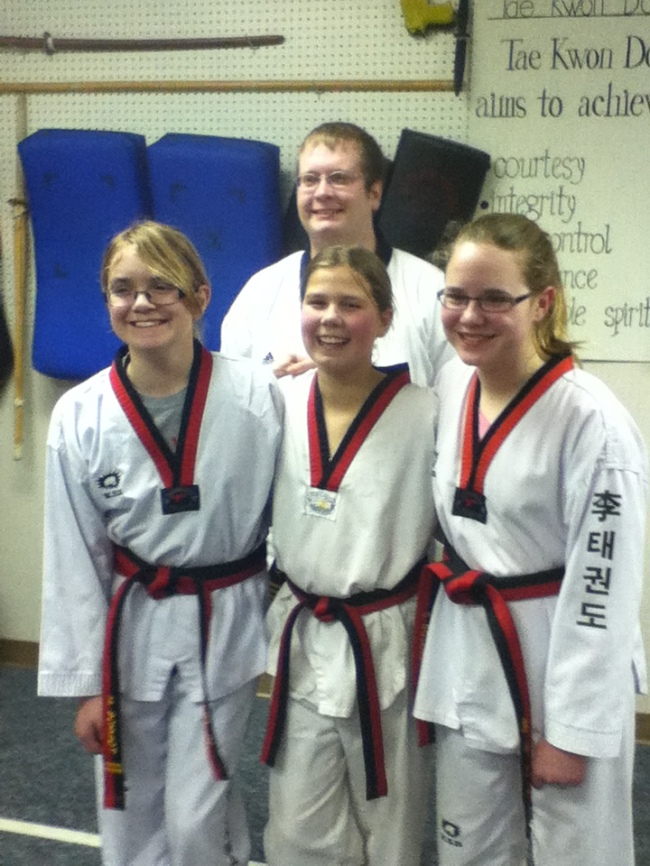 Such Pride I have in these 3 girls from our local Tae Kwon Do gym.  My daughter is the girl in the center.  The time, training and determination these three girls have shown amazes me.  I have such hope for these kids in the future.  They know the meaning of hard work, and commitment.  Things aren’t given to you, you earn them.  These girls gave up time every night during their Christmas vacations to train and work hard.  They learned Korean terms, numbers, and many other facts. They also needed to know their patterns and numchuck patterns, and had to break 5 boards.  How they fit all that info in their brains just amazed me.

Pride was welled up in my chest and throat all night.  Watching all these young people working so hard just brings me chills.  So many kids think they deserve that first place trophy for just being themselves.  These kids have learned that if they don’t pass everything in the test they don’t pass and get that next belt.

My dear Greta tried so hard and did wonderfully on her test.  Her material was solid and she was strong in spirit and strong in body.  Her nerves got the best of her on her breaks.  She broke the board with her elbow but missed the others.  She did not get her belt last night.  She had tears in her eyes but she sucked it up and knew that she can break those boards (tomorrow).  She will earn that belt and she will be a 2nd degree poom by class on Monday night.

The smile on her face after the test congratulating the other two girls on their new belts again brought again PRIDE.  This picture was taken after the test and I think you can see the pride in all the girls faces.